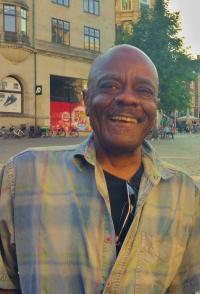 Pioneering steelpan jazz musician, Rudy "Two Left" Smith chats with Jazz in the Islands editor, Nigel A. Campbell, about his career. His beginnings in Trinidad, his sojourn into Europe to perform and ultimately record are discussed. Landmark albums like his Otinku with the Modern Sound Quintet are put into context as a steelpan jazz first. Now resident in Denmark, Smith's career spans more than 50 years playing and recording music on the steelpan, being among the few still alive who made recordings on the Cook Records label here in Port of Spain, Trinidad and Tobago. A bebop musician who uses the steelpan as his instrumental voice in the jazz conversation on the band stand, Smith continues making albums that still garner rave reviews from jazz critics and stand as benchmarks for a new generation to strive towards. A major influence on a number of new steelpan jazz musicians, Smith is modest in his recognition of the deserved accolades. Mon, 19 Feb 2018